Kaeuoi can be compared to a labour union, representing the opposite than usual. Thus, instead of having the labour theory of capital as a root of its existence, Kaeuoi has Intequity (Capital of ideas) as a root, combining it with labour. The purpose is for Internet users, to group together against exploitation on the Internet. Lately the news showed clearly, Internet users are exploited, especially by social media websites. Imparting of ideas and personal information is worth a lot, making vast amounts of money from it. Whilst accepting advertising, e.g. Kaeuoi Community will be, ones could say, a migrant community on the Internet, to "greener pastures", if they are not sufficiently respected by the-exploiting. The Kaeuoi Community will use their group power to negotiate better circumstances for the group on the Internet. An example of how group power can be used, is, diverting advertising income to Kaeuoi Community members. If website owners and managers will not be willing to share advertising income with Internet users, the Kaeuoi Community can migrate to other websites, where they are considered more.

Owning Kaeuoi (KAE) tokens will prove membership. The financial benefits when it realize, will be distributed to KAE token holders. Group communication will happen at the Kaeuoi group on the Cent.co social media site. Direct Message @mdpienaar at Cent.co to be added to the Kaeuoi group. Members are needed on all social media websites to build the Kaeuoi Community. The larger the Kaeuoi Community is, the more power management will have to negotiate benefits for KAE token holders.

Currently the logo, the name and the idea, explained above, make up the brand-value/goodwill. To follow the developments go to the Initial Token Offering (ITO) page at Africahead.

During the ITO and after the ITO, KAE brand tokens will be listed on Ipparts Exchange (IPPAEX).

Moyom (MYM) utility token will be used as the money for the Kaeuoi Community. 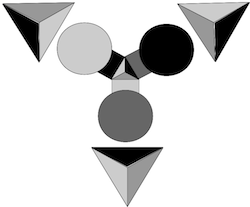 Kaeuoi logo, in the above orientation, refers to one's own soul and comprehension of idealism as opposed to materialism. Idealism basically means, humans structure matter and their surrounds, starting with good ideas. Choosing idealism as dominant over materialism implies a choice is made for survival with creative ways. It is a choice in favour of the ideas Truth and Love and in favour of universal laws. It is a choice in favour of groups Being good. Choosing idealism implies considering value added by labour and ideas whilst remunerating accordingly, with for example, bonuses for good ideas.

In the above orientation, it refers to others' souls and comprehension of materialism as opposed to idealism. Materialism basically means, humans are determined by matter and their surrounds. Choosing materialism as dominant over idealism, means a choice is made for survival by murderous means. It is a choice against the ideas Truth and Love and against universal laws. It is a choice in favour of idolatry, messianism, apocalypticism and evil singularity. Choosing materialism means trust in only the labour theory of capital, whilst imparting ideas, without remunerating people for good ideas.

(1) Sign in to Metamask.
(2) The allowance bar first has to be moved to the right to give the smart contract the authority to exchange tokens.
(3) Own bids to purchase KAE can also be formed with any Ethereum token. Please notify if it is done.

Counter bids to buy KAE can be placed. If a counter bid is placed, please send an email to confirm.

Telegram News - not for chatting.